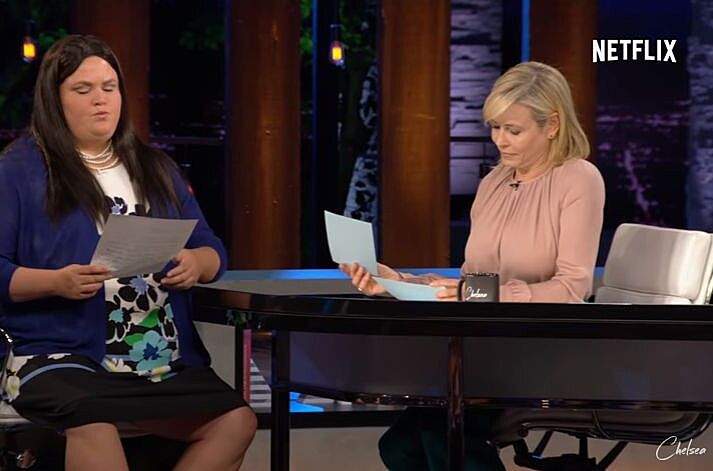 Sean Spicer, a.k.a. Chelsea Handler’s “spicy little baked potato”, may be gone as the White House press secretary. But his replacement Sarah Huckabee Sanders is already proving herself to be just as easy to make fun of.

Recently, Sanders attended a press conference to read a letter supposedly written by a small child named “Pickle”. In this letter, little Pickle talks about how Donald Trump is his favorite president. The boy even claims to have had a Trump-themed birthday party. Look, I’m not going to definitely say that Donald Trump himself wrote this letter, because I don’t want President Orange to sue me. So I’ll just say that this is a possibility.

This letter was so ridiculous that Sanders has been catching hell for reading it ever since. On her Netflix series Chelsea, Handler took a swing at Sanders by bringing on an impersonator to mock her. And let’s just say it’s not a very flattering impression.

In the faux interview, Sanders heads to Chelsea’s desk to read another letter from a child, this one from a boy called “Cucumber”. The innocent letter begins with Cucumber explaining he has only been alive for two presidents, but prefers Trump because he’s “the white one”. He also talks about having a Trump birthday party, but things quickly go south when the boy talks about performing sexual acts on oneself in honor of Steve Bannon.

You can watch the complete interview below.

Next: Stephen Colbert: Donald Trump is a dictator!

You can catch new episodes of Chelsea when they premiere every Friday on Netflix.